I really like to use my Christmas break to get a lot of sewing done and I also try to get stuff organised so I can spend more time sewing than preparing once I get back to work.This Christmas break I also had another project to focus on.  Since D#1 got married and left home I have been slowly transforming her room into Susan's Sewing Space (SSS) - a physical space instead of cyberspace.  I think a sewing room will always be a continual evolution, but for now it's in pretty good shape.  More on that in a later post.
But for now - here is part of what I achieved during my break:

Firstly a sewing tidy for my Daughter - the one who moved away and now has my "spare sewing machine". We spent a week at her place while she and her husband were away and I decided she needed a nifty little pincushion and rubbish container (and some decent pins). 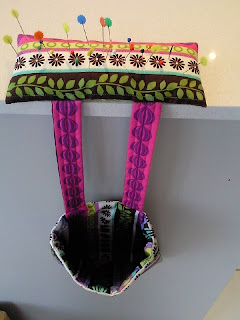 Whilst holidaying at her place I also stiched the block of this project and finished it off at home: 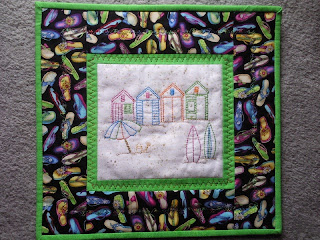 This is one block from the pattern by Helen Stubbings - Truly Aussie.
(And believe it or not - it will hang in the room where the toilet is - as opposed to "in the toilet" - since I have decorated that room with beach houses - nothing crazy about me at all!!)

This wall hanging was all stitched during 2011 but needed finishing off. And now hangs on the door of SSS. 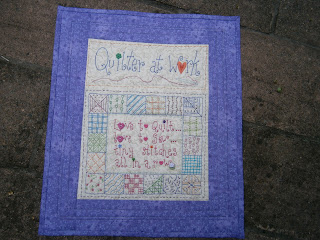 and a close up of the verse: 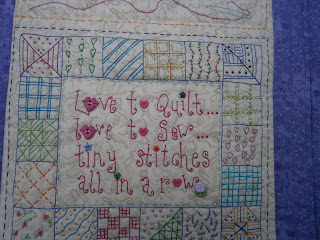 This block was stitched way back - anytime from 2005 - 200?  (New Years resolution - make notes of start & finish dates), so I completed it to hang on the door to SSS. 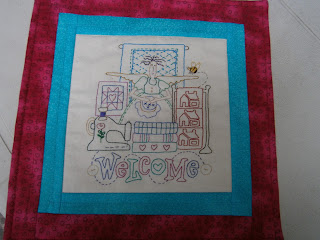 (I took the photo before adding the buttons.)
Its a Bronwyn Hayes design and here is the label: I finished off this quilt - "Pansies in Bloom" - made from 9 patch blocks made by the members of my patchwork group for my birthday in 2010 (and added to by me).  It should have been finished by my birthday in 2011 - and I nearly made it - apart from the binding.
Its a disappearing 9 patch pattern - so easy and so effective with a scrappy look.  I gave each person a square of pansy fabric and they added tone on tones or pansy fabrics. 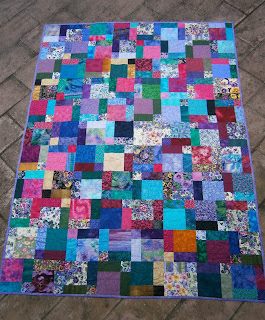 I also finished my Tis the Season - this was a project over at the Stitch-a-Long blog - I didn't belong to the blog for that quilt although I am now a member. 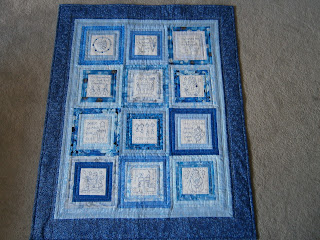 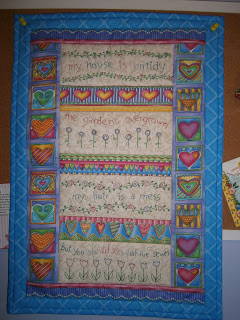 Well, I guess that's it - apart from all the work I did in my room. (Just loving having my own separate space!!!)

How fun having your own sewing space... Yeah for you! Looks like you have been busy to with all those beautiful finishes :O)

Looks like you have been busy during your time off! Congratulations on your finishes (isn't it a wonderful feeling?)

Those are beautiful stitcheries. Love those ones for your SSS. Great finishes already.

Congratulations on gaining your own sewing space!!!!
It is good to be able to leave works in progress out and not have to move them to eat at the table!

wow you have been busy. Hugs

Wow you've been so busy. Lots of lovely projects done Susan.You should be very pleased with yourself. Lucky you to have a SSS....Your Tis the Season looks amazing in blue... I love it!!!

You have lots of lovely projects done .... I enjoy stitcheries too.... great to meet another fellow Queenslander....
Hugz

You have been super busy. Love those projects. 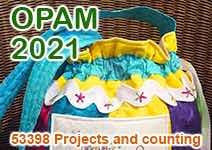